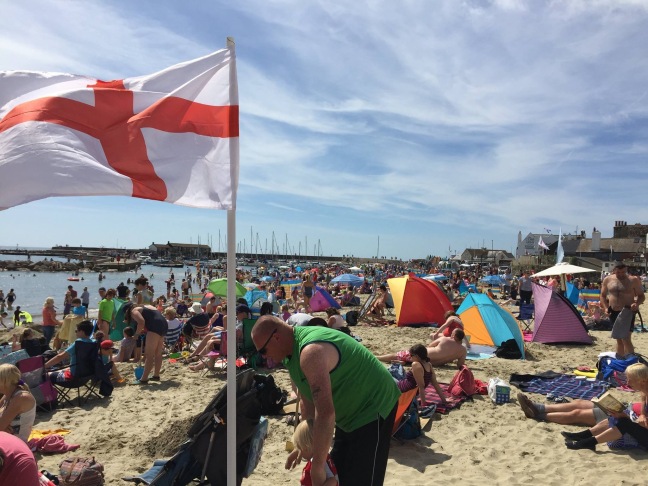 This photo caught my eye. “So crowded” was my first thought. I looked again. Felt uneasy. Felt guilty. Felt confused.

It’s not hard to work out why. This is reality not an air-brushed brochure. The beach isn’t pristine, the clothes are not haut-couture and the bodies aren’t air-brushed.

But the chaotically packed sand, the brawny sleeveless t-shirted chap in the foreground (“big bloke in wife-beater shirt” said one commentator), the fluttering cross of St George. Martin Parr, welcome to Britain 2016.

But let’s not jump to conclusions too quickly. You can try to play “Where’s Wally” by looking for a can of Stella somewhere, but I think your time would be better spent.

Take the man in the foreground – and I am sorry Sir, but I do not know you or who you are. But actually, he is helping his small son – almost out of shot, dressed in an Arsenal kit (not a fashion crime, as far as I am aware. Unless you’re a Spurs fan).

And try as you might, I couldn’t find a can of Stella, or a knotted hankie. But I do see people reading books and newspapers and actually not doing any harm to anyone.

I know some people get very uncomfortable about these sorts of images – just as many did about Parr’s seminal work “The Last Resort”. There is nervous well-to-do middle class laughter about peole we presume are less well off, less cultured, less confident or adventurous than us. And then some guilt because we might be responsible. But I think it is wrong – indeed patronising – to generalise in this way.

No, my unease about this photo comes from two places. First, I can see no non-white faces. Ok, this may be indicative of my urban multiculturalism, but the lack of diversity is really striking. Discombobulating almost.

And then there is that flag. Oh how things have changed in the last month with that flag. When I was a kid, the Cross of St George meant trouble.  It had been colonised, taken over paraded by the far right of the day. Then came less worried times. The people as a whole made a determined effort to repossess the flag for everyone.  We collectively rejected a national symbol being the private property of an abusive small minority – or maybe in times of prosperity, such things become less important.

But now? Now I am not sure.  Post –Brexit  don’t we feel ill-at-ease?  My foreign-born friends are (mostly) palpably worried, anxious, and careful. Racists and xenophobes seem emboldened even though I am sure most people who voted “out” would absolutely reject such intolerance. How do we react to icons that have become tarnished in this way? How can we live with them as we did before? How do we stop ourselves possibly over-reacting and placing our own fears and presumptions at the doors of innocent others?

Questions, questions. I do think  Martin Parr would have been happy  to  have taken that photo, and  to feel  a link with  the Thatcherite  backdrop of  “The last resort”. There is no doubt we live in challenging times. But rather like that Guardian “Points of View” advertisement, we need to be sure we see all angles before jumping to conclusions.

One thought on “Points of View: Me and St George”