“One false move and the Griffin get it!” The weary staff of the Midland Bank seemed even more resigned than usual.  But with faces masked in tea-towels, the villains weren’t to be discouraged. Griffin was hustled out of the building and (with apologies for mixing my species) ferreted across the road back towards campus.

But there you have it. Heslington Village, the Midland Bank, a small store and a couple of pubs was really an extension to campus.  The Hogsmeade to our Hogwarts?  Well, not quite.

Those two inns, as we all know, were the Charles XII and the Deramore Arms.  The former now boasts of being the closest pub to campus, whereas in the 1980s that seemed positively resented.  The Derry now offers a gastropub menu in refurbished surroundings. Refurbished? About time too – decay or demolition looked more likely then.  And if you wanted pub-grub (and knew someone with the luxury of a car that worked) you would surely head for the Agar Arms out in the wilds at Warthill.

Being closer, the Charles was naturally the first port of call. So close to Derwent Common Room that you could sprint in a rainstorm without getting wet –  past the stationery  store (can you believe they were going to turn it into the university’s wine cellar – another story  perhaps) and Hes Hall.

This engendered a false sense of security. One of the afore-mentioned cars – a more-rust-than-metal AlfaSud – had lost the luxury of, well, working. The Charles was designated as the open-air workshop du choix.

Carefully pushed by willing hands to the parking spaces in front of the pub (where the wheelchair access ramp is now), the bonnet was raised and somewhere between a dozen and twenty mechanical experts offered opinions, diagnosis and remedy. Pints were balanced on any flat space, as this collaborative rescue mission took shape. The sun dipped and torches appeared like magic wands.

“Try it now”. Cough, splutter, nothing. “Try again”. The engine caught and there was a collective “aah”. Heads nodded sagely. “Told you so,” “Knew that would do it.”

Except the brakes had gone, something fortunately discovered fairly quickly – at least before the junction with the main road. In such circumstances there was only one option – drive terribly slowly back onto campus proper,  and hope like hell nothing would cause the need to stop abruptly.

I suppose I can see why the landlord may have felt more abused than privileged. But if there was a  guerrilla cold-war between  villagers and students,  indiscriminate revenge was part of the armoury: Some months later  I was barred for asking how long the food I’d ordered would be.  And I haven’t been back since.

In comparison, the Derry felt almost like an excursion to the country. At the time it sat right at the end the main street with only fields and footpaths beyond. It was fusty and dusty.  Comfortable in its own skin but heading towards the moribund.  But good to have a choice – especially if (like me) you ended up not being able to use the alternative!

All these tumbling memories were triggered by the menu for the Derry’s £10 Steak Night suppers. Posted on social media,  a virtual posse of 1980s alumni was poised to  gallop up the A1. Maybe we all will at some stage. Preferably in cars with working brakes.

And Griffin? I recall that the Midland wouldn’t pay a ransom (a donation to charity), so we asked the other banks in the village, who did. But the following year, a similar stunt reportedly saw the police called.  Innocence certainly didn’t last long.

Disclaimer: All this happened more than 30 years ago and memories can be unreliable. My apologies to anyone who thinks they may recognise themselves and is disappointed by my recollection!

A sad postscript: The Deramore Arms closed for good in Spring 2017 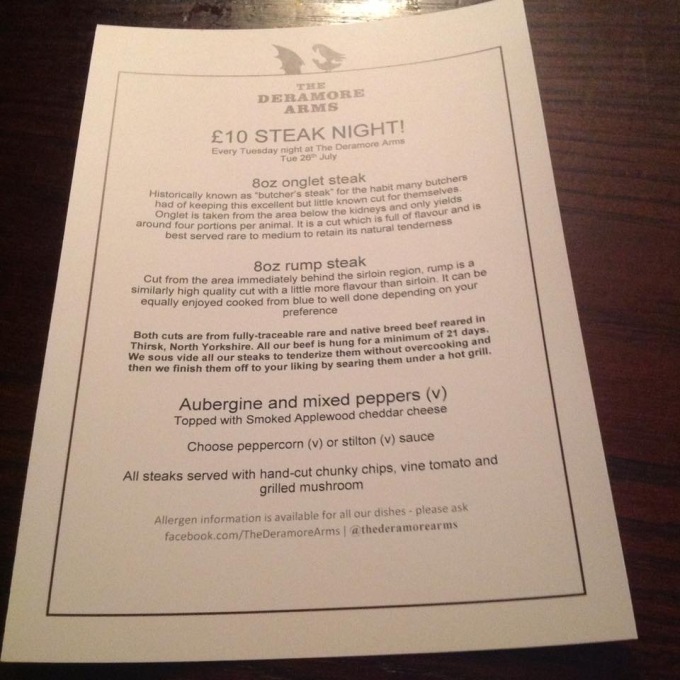