Or…be careful what you wish for.
What would you say if the last two bookshops in your town closed – apparently having been spurned by the landlord who is taking advantage of a lease break to rake in the rent from a US-based fast-growing bank?

A tragedy? Outrageous? A metaphor for our times?

Well, despite the recovery in the paid-for printed word some hard commercial realities and the whiff of a suspected scandal have collided with fireworks in south west London. Wimbledon’s last two retail bookshops closed within days of each other – as the space was re-let to Metrobank .

This has all the hallmarks of a good old heroes-and-villains, right-versus-wrong, culture-against-mammon dust up. But the truth, as much as can be gleaned, reveals a different picture.

Lease-breaks happen, so no surprise there. But locals have claimed the failure to offer sitting tenants first refusal on a renewal is far from best practice. Waterstones and WH Smith’s clearly identified the lease-break as the reason for their departure – but one declined to name the landlord and the other has yet to confirm (to me, at least) they want to stay in the area.

So has the landlord metaphorically stuck the knife into doughty beacons of culture and learning on this high street – passed them over to make a bigger buck out of new tenants?

In fairness the landlord – Hermes– has a pretty good pedigree when it comes to acting ethically – the Frank Barnes school at Kings Cross being a case in point. So maybe Waterstones and Smith’s are themselves subject to some controversy.

If they wanted to stay, why not a vigorous search for alternative accommodation as soon as jeopardy emerged? Are local business rents prohibitively high? (A little but perhaps not ruinously – around £45 per square metre per annum seems commonplace ) Is no accommodation readily available? (A bigger problem, perhaps) Or are feet being dragged because Crossrail2 may destroy half of Wimbledon town centre and blight the other 50% starting in as little as two years’ time? Were they in fact made an offer that they felt they couldn’t refuse?

One thing is clear – the incoming business is cheerfully expansionist. Metrobank is the creation of Vernon Hill (a colourful but dated pen portrait of him from 2001 is here) who has a clear vision of what he wants, business-wise, and a well established model of operating. Perhaps ironically, it is a model that is based on high levels of footfall in each branch. It may be that Metrobank could pay more than Smith’s and Waterstones, but did they? And if they did, so what?

Because, in a neat twist, Hermes has a responsibility to get the best return it can on its assets, for it is the recipient of inward investment by many pension funds. The actual and prospective pensioners are possibly just the same people who would prefer to see bookstores than banks. 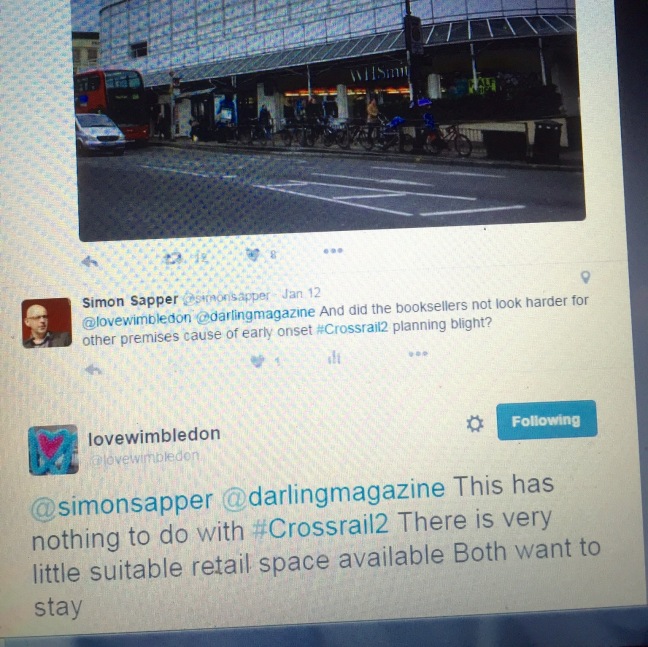 Whatever further may yet emerge, there is one inescapable point: Clicks to confirm purchases from on-line retailers add up to a seismic shock to traditional booksellers. They have to reconfigure, rationalise, and search for a revised niche. None of this is news to those in the trade – but can we really cry foul at the consequences of our own actions on town centres and high streets?

Does this illustration – which I think is probably a repetition of something seen frequently over the last years on our high streets – herald the demise of the bookshop?

I foolishly believed that something approaching a full service would be kept at these shops right up to the point of closure. So looking for a particular book, I crossed the thresh-hold and immediately felt the stale atmosphere of resignation. Whole units removed, open packing crates everywhere. Space empty or emptying before my eyes.

The books may be off the shelves, and e-books may be a fading novelty, but the writing is certainly on the wall. 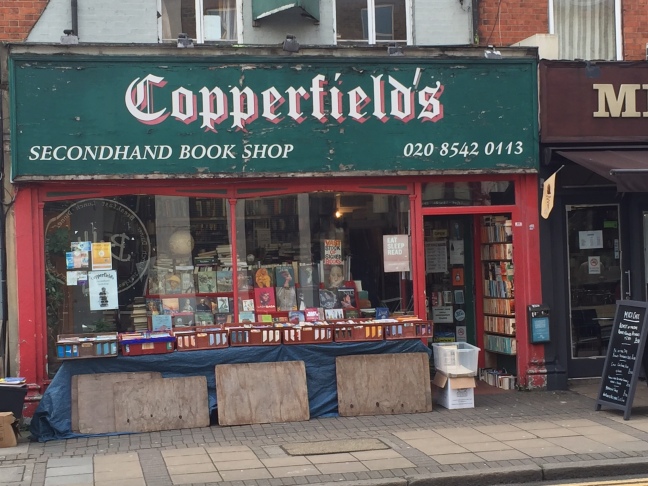 The only place in central Wimbledon where you can still buy books (Credit: Author)

One thought on “Death of the High Street?”